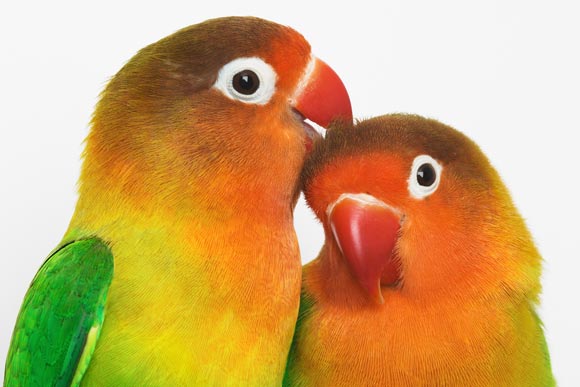 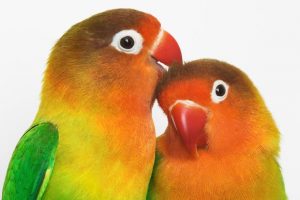 No animal represents the sentiment of Valentine’s Day more than the lovebird. The petite, brightly plumed parrot is a favorite among bird enthusiasts and a popular pet. Lovebirds have inspired scientists and poets alike. Below are a few fun facts about lovebirds.

The monogamous birds reach sexual maturity when they’re about ten months old. Mating begins with courtship behavior, and can continue throughout their roughly 15-year lifespans. Monogamy is essential to the social stability of flocks and underlies much of their social behavior.

Lovebirds pine for each other

If a mate dies or gets separated from the flock, its companion exhibits erratic behavior that some have likened to depression. Birds kept as pets often don’t like being alone and will exhibit similar behavior in captivity.

Lovebirds feed each other

Often after a long separation or stressful period of time, breeding pairs of lovebirds feed each other to re-establish their bond. One bird transfers food to the mouth of its mate, a feeding technique reminiscent of affection in humans—hence the inspiration for the parrots’ name.

There’s more than one species of lovebird

The nine species classified as lovebirds all come from the genus Agapornis. Most lovebirds have a green body and sport different head feather coloration. Their closest relatives are hanging parrots, found in Asia.

Lovebirds are from Africa

Lovebirds are native to the forests and savannas of Sub-Saharan Africa and Madagascar. Fossils of ancient lovebird species have been unearthed in South Africa, dating to as far back as 1.9 million years ago.

You might see a lovebird at your backyard birdfeeder

That’s if you live in the American southwest, San Francisco or cities in Africa. These areas are home to feral populations, flocks that likely either escaped from an aviary or are the remnants of an abandoned aviary.

Lovebirds are cavity dwellers. Some make their home in holes in trees, rocks or shrubs in the wild, while other species nest in groups, or others pair off to build their nests away from the flock. In urban settings, they might rely on anything from a tree to a crevice in a building. Peach-faced lovebirds in Phoenix, Arizona, often make their homes in cacti.

Fisher’s lovebirds (Agapornis fischeri) carry single strips of tree bark in their beaks. Peach-faced lovebirds (Agapornis roseicollis), on the other hand, hide bark in their feathers. Scientists believe that the latter is more complex behavior as an ancestral trait, and have used this facet of lovebird nest-building as an example of the intersection of evolved and learned behavior.

Some lovebirds are androgynous

In three species of lovebirds, the males and females have defining characteristics that allow you to tell them apart. For example, among Black-winged lovebirds (Agapornis taranta), males have a crown of red feathers, while females have entirely green plumage. But other species don’t have the same degree of sexual dimorphism, making it difficult to determine their sex just from looking at them. In some species, males may be slightly larger than females, but a DNA test is necessary to provide conclusive results.

Lovebirds survive on a healthy diet of seeds, berries, fruit, and occasionally insect larva in the wild. In Africa, they’re also known as crafty crop pests, as they feast on millet and maize farms.

Lovebirds can be mean

Aggression isn’t uncommon in lovebirds. The parrots are territorial, and are known to get along poorly with birds of another species. Within their own kind, lovebirds can also become jealous or hormonal during mating season. In captivity, they’ve been known to attach both other bird species and other lovebirds, with peach-faced lovebirds the most notorious for aggressive behavior.

Some lovebirds might become endangered in the next decade

The black-cheeked lovebird (Agapornis nigrigenis), native to Zambia and found in parts of Zimbabwe and Botswana, is classified as vulnerable by the IUCN Red Listing of Threatened Species. The biggest problem is drought (possibly driven by long-term climate change), which is drying up regional water sources that flocks rely on. The latest survey puts the black-cheeked lovebird population at around 10,000 birds in total.

Scholars typically cite a poem by Geoffrey Chaucer as the first evidence of the connection between the religious celebration of Saint Valentine’s day and romantic love. The poem, “Parliament of Foules,” happens to feature two birds which exhibit all the markings of human love.