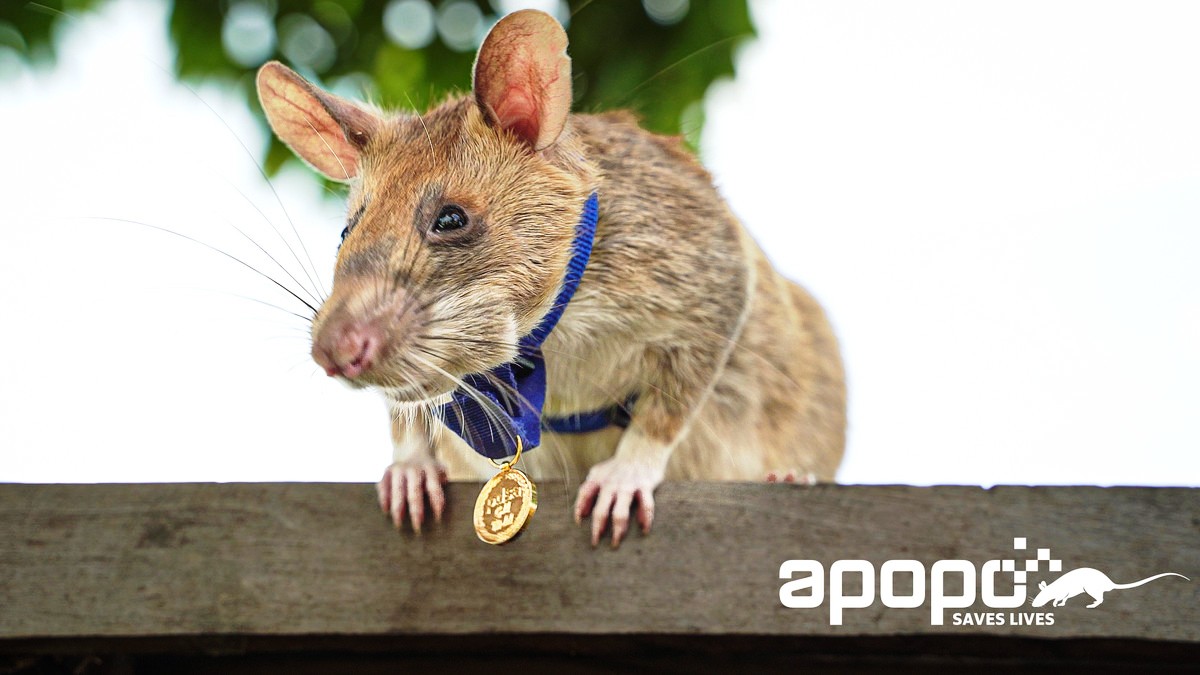 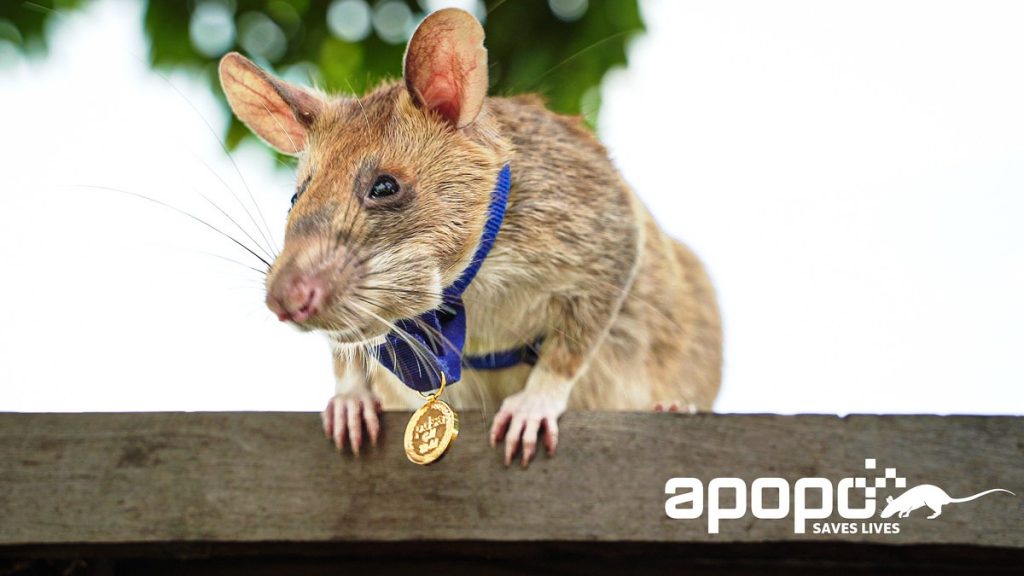 APOPO is delighted to announce that HeroRAT ‘Magawa’ has been awarded the PDSA Gold Medal for life-saving bravery. Magawa is based in Cambodia and supports APOPO‘s efforts to rid Cambodia of the deadly legacy of landmines.

Magawa is an African giant pouched rat that was born in Tanzania in November 2014. He grew up at APOPO’s Training and Research center in Tanzania where he learned how to detect the smell of explosives using his nose. Under the loving guidance of his human rat trainers hefully completed his training in 9 months and began to prepare to leave for the field. Magawa moved to Siem Reap in Cambodia in 2016 where he met his new handler Malen and began his successful career.

To date he has found 39 landmines and 28 items of unexploded ordnance, making him APOPO’s most successful HeroRAT. Over the past 4 years he has helped clear over 141,000 square metres of land (the equivalent of twenty football pitches), allowing local communities to live, work and play without fear of losing life or limb.

Magawa was formally presented with his rat-sized PDSA Gold Medal – the animal equivalent of the George Cross – via a live link between Cambodia and the UK today by the PDSA’s Director General. He is the first rat in the charity’s 77-year history of honouring animals to receive a PDSA Medal – joining a line-up of brave dogs, horses, pigeons and a cat.

Over 60 million people living in 59 countries from Angola to Cambodia, do so in daily fear of landmines and other remnants of past conflict. Landmines remain as painful and dangerous reminders of the past, continuing to threaten personal safety, economic development and food security; agricultural land is left unsafe to farm and grazing livestock is dangerous. Trade routes remain closed, cutting off communities and denying families displaced by war the chance to return home safely. Yet detecting these weapons is very tedious and therefore expensive while global funding is declining.

APOPO’s Cambodia program now clears more land each year than any other APOPO program. Targeting 3,500,000 m2 in 2020, APOPO already achieved 81% of its yearly target, having cleared 2,862,736 m2 between January-August. This would not have been possible without the help of little heroes like Magawa.

Christophe Cox, CEO of APOPO, said: “APOPO’s HeroRATs significantly speed up landmine detection using their amazing sense of smell and excellent memory. We use clicker training to teach rats like Magawa to scratch at the ground above a landmine. During training they hear a ‘click’ and receive a tasty food reward for finding the correct target scent. Unlike metal detectors, the rats ignore scrap metal and only sniff out explosives making them fast and efficient landmine detectors. This not only saves lives but returns much-needed safe land back to the communities as quickly and cost-effectively as possible. This in turn will allow the families living around the minefields to improve their livelihoods and get their lives back on track.”

PDSA is the UK’s leading veterinary charity, providing free and reduced-cost veterinary care to the pets of people in need. The PDSA Gold Medal is awarded to civilian animals for life-saving bravery and exceptional devotion to duty. The Medal is now recognised worldwide as the animals’ George Cross. Magawa is the 30th recipient of the PDSA Gold Medal, and the first none-canine to receive it. For more information about the previous recipients visit www.pdsa.org.uk/Medals

Commenting on the award, PDSA Director General Jan McLoughlin, said: “The work of HeroRAT Magawa and APOPO is truly unique and outstanding. Cambodia estimates that between 4 and 6 million landmines were laid in the country between 1975 and 1998, which have sadly caused over 64,000 casualties. HeroRAT Magawa’s work directly saves and changes the lives of men, women and children who are impacted by these landmines. Every discovery he makes reduces the risk of injury or death for local people. The PDSA Animal Awards programme seeks to raise the status of animals in society and honour the incredible contribution they make to our lives. Magawa’s dedication, skill and bravery are an extraordinary example of this and deserve the highest possible recognition. We are thrilled to award him the PDSA Gold Medal.”

What does APOPO stand for?

APOPO is an acronym from Dutch which stands for “Anti-Persoonsmijnen Ontmijnende Product Ontwikkeling“, or in English, Anti-Personnel Landmines Detection Product Development. 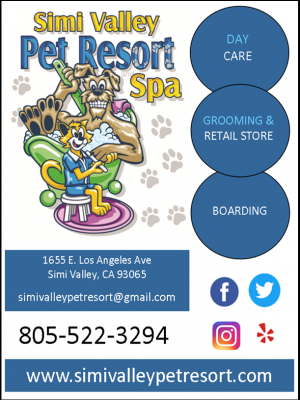 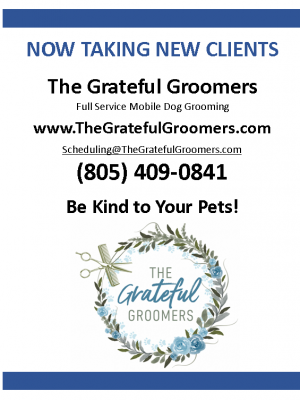